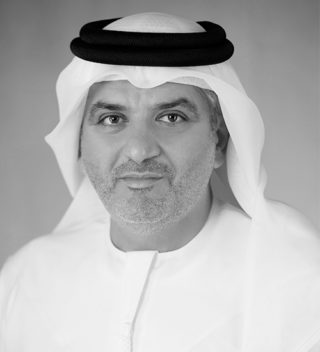 Mr. Rashed Al Baloushi has been the Chief Executive Officer of Abu Dhabi Securities Exchange since March 5, 2012. Mr. Al Baloushi served as Director of Clearance, Settlement and Depository Department at ADX since his joining in 2000. He served as Deputy Chief Executive at ADX since 2007. He has redefined ADX’s strategy, created a more robust establishment upon which ADX can flourish, and strengthened ADX’s portfolio through his constant dedication and innovation. He served as the Head of Registrar & Depository at the Abu Dhabi Free Zone Authority from October 1997 to April 2000. He was in full charge of the exchange during the period from January 2006 to September 2007, when the trading at ADX reached all time peaks, handling efficiently the influx of transactions during the period. He also played a major role in all the developments that took place in the exchange since inception, including all technical and legal achievements and that includes, among many things, upgrading the trading system, developing market rules and regulations, introducing new facilities and enhancing the e-services provided by the exchange. He received his MBA from the UAE University majoring in Leadership, while he received his BSc Computer Information Systems from Benedict College, Columbia, South Carolina.